It is difficult to make precise determination of the actual beginning of any idea, but for each concept throughout time then must have been a minute spark occurring in the brain of some individual which, germinated by thought, eventually developed into a role of logic, a law, or a concerted and effective movement.

Such ideas may emanate from frustration, from emulation, from motivation toward improvement, or from acid indigestion. It is not unreasonable to believe that any person who suddenly finds himself holding an exceedingly hot brick will immediately be seized with a strong feeling that such a brick should be released without delay. This is the beginning of an idea.

No idea can rightfully be called original with a single individual, since an idea can easily occur to a number of people at a given time. The originality lies in the development and extension of the idea.

In our day of sub-organization and multi-organization, it is natural that people with common fields of interest and endeavor will be mutually attracted and will congregate around a single idea to create organized groups. Whether these groups are established upon the basis of self-interest and self-protection (as most of them are) is not as important as how each group conducts its activities and extends its efforts for the total good of all mankind.

In the early 1960s, it was noted that of the many existent professional and educational societies concerned with building, none provided a place, a welcome, or any benefit whatever for curriculum with the teaching of construction as a major objective. This, in spite of the fact that many curriculums in construction had at that time been in existence for more than twenty years. People engaged in teaching architecture, civil engineering and like disciplines unfortunately felt (and openly stated) that construction curriculums should properly be relegated to the status of a secondary adjunct. 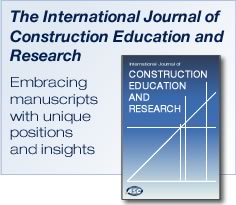